Congratulations Rangers! 2022 Champs! Back to Back!

The 2022 Diamond Dreams League Championship took place September 25th, in a rematch of last year's Championship game between the Pelicans (Formerly the Astros) and the Rangers. For the 2nd straight year, the Rangers came out on top to take home the trophy! The Pelicans attempt at a late inning rally, where the Rangers coughed up three runs, was not enough as the Rangers won easily 11-3.

Mike Joerger was on the hill for the Rangers. The starter pitched a complete 9 inning game, 8 of which were shutout innings, until allowing 3 runs in the top of the 9th. Joerger gave up just five hits on the day and struck out 5. Another terrific outing for the pitcher, who led the league in ERA this year, almost keeping it sub 1.0 on the season, until allowing 3 runs in his last inning of work. He finished the year with 50 innings and a dominant ERA of just 1.26.

Mike Loftin was the starter for the Pelicans. The bulldog lasted five and two-thirds innings, not allowing another run after the first inning, until the bottom of the 6th. For the day he allowed ten hits and seven runs while striking out three and walking one. Dustin Bowen threw two innings out of the bullpen.

The Rangers had 15 total hits in the game. Hudson Miller, Chris Joerger, Pat O'Hara, Mike Joerger, Brian Kennedy, and Mickey Gallagher each collected multiple hits for the Rangers. Miller led the way with three hits in five at bats and 1 RBI. Pat O'Hara led the way with run production, going 2 for 3 with 4 RBIs followed by Kennedy who drove in 2.

This closes out another competitive and fun season of Diamond Dreams Baseball. We hope that all 11 teams will be back next year for another season, starting in early March.

to the Rangers and on behalf of the Diamond Dreams board, we thank each and every player for being a part of our league!

The 2021 League Championship game was finally able to take place this past Sunday October 3rd. The game featured a matchup between the first time Astros and the 8th time in the last 9 years for the Rangers in the title game. The Astros fell behind early and couldn't come back in a 14-2 loss to the Rangers, now winners of 6 out of 8 trips to the Diamond Dreams League Championship game. Congratulations to both teams for making it to the title game and to ALL teams navigating through another challenging year in Louisiana!

The Rangers started the scoring off in the 2nd inning on a walk by Rick Hudson, a double by Ray Poirrier, and a single by Geoff Clement. With the 4-0 lead, they never looked back on the way to a 14-2 victory. The Astros struggled to contain the high-powered offense of the Rangers, giving up another 4 runs in the 3rd inning sparked by a 3 run double by Randy Fink, 2 more in the 4th and another 4 in the 5th. The 4 runs in the fifth inning, were capped off by a double by Chris Joerger.

Spencer Ott was the winning pitcher for the Rangers, going the distance allowing 11 hits and two runs over eight innings, striking out three in the rain shortened game.

Dustin Bowen took the loss for the Astros. He allowed five hits and four runs over two innings, striking out two.

Of the 11 hits for the Astros, Ernie Neves, Kyle Loftin, Bowen, and Mike Loftin each had multiple hits on the day. Neves shined for the Astros, going 3-for-3 with a walk at the plate.

The Rangers tallied 16 hits in total. Pat O’hara, C. Joerger, Roberts, Clement, and Mickey Gallagher all managed multiple hits, led by O’hara with 3 hits in 5 at bats and 4 runs scored. The Rangers defense was sure-handed, not committing a single error and was highlighted by a bare hand grab of an errant throw at 2nd base by shortstop Mike Joerger to record an out.

Once again congratulations to both teams in making it to the championship game and to each and every player that helps make our league what it is! We look forward to the start of another competitive season next March!

Congratulations to the Yankees for a tremendous season, going 9-1-1 to reach the 2020 Diamond Dreams Baseball League championship game versus an undefeated White Sox team!

Let me first start off by saying 2020 was such a challenging year in so many different ways. I am beyond grateful for the dedication and hard work put in by all, so that we could even have a 2020 season. A stoppage, followed by everyone doing their best to follow a new set of guidelines in order to keep everyone safe, culminated in a show down between the best 2 teams this past season!

It would not be 2020 if the game did not end with some controversy, however. In what had been up to that point a very close and well played game by both teams, with the Yankees up 3-0 in the top of the 7th, a controversial call on a home run that made the game 6-0 in favor of the Yankees, ended the game in a dispute.

Taking nothing away from either team, especially the Yankees, this years Championship goes to the 2020 Yankees. Again congratulations to the players and fans on a great season and winning the championship!

3-Peat! Congratulations Rangers, 3 in a row!

The 2019 Diamond Dreams Championship was a hard fought game played by 2 very determined teams. It came down to the last play, but the White Sox were on the wrong end of a 6-4 defeat to the Rangers on Sunday August 18th. The game was tied at 4 with the Rangers batting in the bottom of the 10th when Ray Poirrier homered on the first pitch of the at bat, scoring 2 runs to secure the walk off win. The White Sox lost despite out-hitting the Rangers 14 to 12 on the day. They got things moving in the first inning, when Louis Dugas doubled on a 2-0 count, scoring 1 run. It was a fiercely contested game all day, with the Rangers trailing most of the game. Trailing by 2 in the bottom of the eighth inning, the Rangers tied things up at 4, when Mike Loftin doubled on the first pitch of the at bat, scoring 2 runs. Spencer Ott was the winning pitcher for the Rangers. Taking over for starter Rick Hudson, he surrendered 1 run on 3 hits over the final 6 innings, striking out 8 and walking 1. Mark Hampton took the loss for the White Sox. He allowed 1 hit and 2 runs over one-third of an inning, striking out 1 and walking 1. Dyron Morris started the game for the White Sox and was strong throughout. He went 9 complete innings, allowing 4 runs on 11 hits, while striking out 10. Rick Hudson started the game for the Rangers, surrendering 3 runs on 11 hits over 4 innings, striking out 2. The White Sox collected 14 hits for the game. Don Stepteau, Chris Powell, Leighton Colbert, Dugas, Morris, and Joe Williams each had multiple hits, all led by Stepteau with 3 hits in 4 at bats. The Rangers totaled 12 hits in the game. Loftin, Poirrier, and Brian Kennedy each had multiple hits. Loftin led the way going 3-for-4, with 3 RBI on the day. Congratulations to the Rangers on securing their 3rd Championship in a row and to all 8 teams that competed in this year’s Diamond Dreams League.

The Rangers secured the victory thanks to seven runs in the fourth inning. The big inning was driven by singles by Phil Babin, Bob Oster, and Brian Kennedy, walks by Ernest Neves and Todd Hibbs, and by Mike Loftin.

This past August saw a repeat of the Rangers versus the White Sox for the Diamond Dreams League Championship. The Rangers won a well played game by both teams, with the final score being 4-2 Rangers! Congratulations to both teams for a great season! 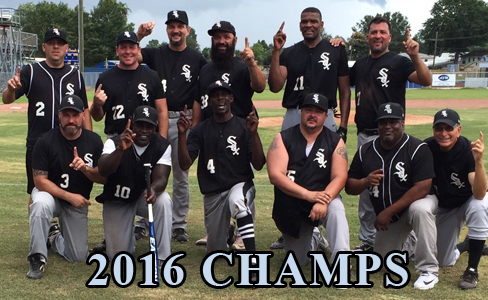 On Sunday August 21, 2016 at St. Charles Catholic, the championship game between the 2015 Champion Rangers and the White Sox took place with the Sox prevailing 5-4. This game took 11 innings before the outcome was determined. With two outs in the top of the 11th, Lynn Brehm smacked a double to drive in Luke Suarez with the deciding run. Leading hitters for the Rangers were: Todd Hibbs, 3 for 5, 1dbl, and Bob Oster, 2 for 5. For the White Sox they were led by: Lynn Brehm, 2 for 5, 1dbl, 2RBI, Luke Suarez, 2 for 4, 1RBI, Reggie Hilliard, 2 for 5, 1dbl, 1RBI, Dyron Morris, 2 for 5, 1DBL, and Jody Simoneaux, 2 for 5. Dyron Morris got the win in a relief appearance for the Sox. Congratulations go out to both managers and their teams for a very exciting game.

This past Sunday, the Rangers defeated the Reds 8 - 5, to win the to become the overall champions of the Diamond Dreams Over 40 Baseball League for 2015. Leading the Rangers at the plate were: Brian Kennedy 2 for 2, Mike Lofton 2 for 3, 1RBI, Ernie Neves 2 for 4, and Brad Washington 2 for 4, 1DBL, 1RBI. Spencer Ott pitched 7 2/3 innings and picked up the win for the Rangers. The Reds leading hitters were: Ricky Philibert 3 for 3, Anthony Giovingo 3 for 4, 1HR, 2RBI, Jacques Jobert 3 for 4, 1RBI, Brian Singleton 2 for 2, and Michael Windham 2 for 4, 2RBI. Alfred Albert pitched the last 8 innings and was tagged with the loss.

Our News Archives go back to 2010. Read all the past action.

See who's in first and see your team and personal stats.

Talk about the League & spread the word to friends